The promise of tomorrow start with today. For all the 30 years of its exlstence. T-Series has never believed otherwise. With the exemplary vision of group founder Mr.Gulshan Kumar, the group rose to phenomenal heights. Thinking ahead is the key to stay ahead. With a focused, well thought of strategy, coupled with an intuitive mind, Mr.Gulshan Kumar catapulted T-Series to multi-product, multi functional company and a force to be reckoned within the world music industry. 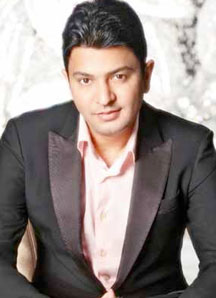 Taking ahead the from where his father the Late Shri Gulshan Kumar handed the reins his established company, T-Series, BHUSHAN KUMAR went on to become the Chairman and Managing Director of this number one music label in India.

Bhushan Kumar took control over the music empire in 1997 and nurtured T-Series into a diversified group with US$ 120 million in core business of music and films. With his impeccable knack for music, drive and determination established T-Series to cross its own limits and walk the impossible roads to achieve growth. Today the music company has ventured into not only acquiring soundtracks but also in new  media  revenue streams like  mobile VAS,  on-line digital,  TV, IPTV,  FM  &  Satellite  Radio licensing and music publishing along with producing movies.

Inheriting the same farsightedness and ability to capitalize on small opportunities from his father, Bhushan Kumar keeps abreast of the latest innovations and technological advancements in the business enabling him to propel the company to greater heights. His operational transformations should evolve SUPER CASSETTES INDUSTRIES LTD into a US$ 200 Million Entertainment Super Power in the near future.

It  has  always  been  his  endeavor  to  reach  the  Global  consumer  and  offer them  the  best  of  original digital content from Bollywood  through  his  digital  initiative  which  is  the  first  from  the Indian  music  industry  and  is  working  diligently  with his core team to  establish  a  more  comprehensive distribution network.

His  name  denoting  success  and  spelling  entertainment,  Bhushan  Kumar  has made T-Series  a major force  to  reckon  with.  He  is  devoted  like  his  father  to  the  music  industry  and has  continued  his  efforts  to  complete  all  religious  projects  the  country  over  and abroad. He also promotes new talent and his commitment to infuse fresh blood into the industry  is well known.